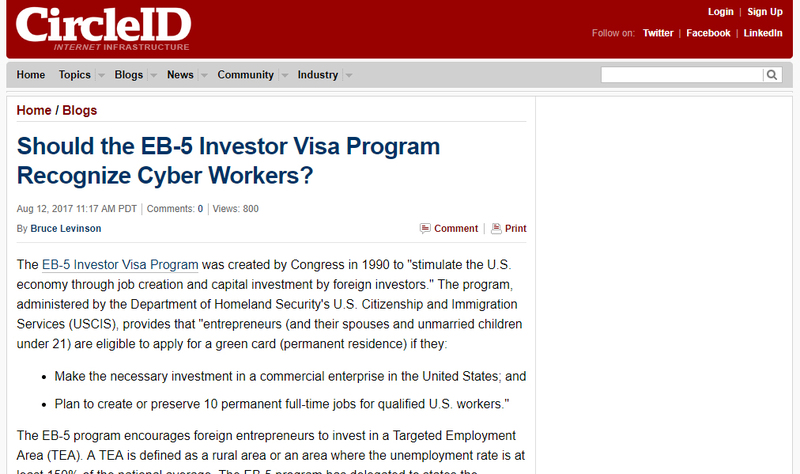 The EB-5 Investor Visa Program was created by Congress in 1990 to "stimulate the U.S. economy through job creation and capital investment by foreign investors." The program, administered by the Department of Homeland Security's U.S. Citizenship and Immigration Services (USCIS), provides that "entrepreneurs (and their spouses and unmarried children under 21) are eligible to apply for a green card (permanent residence) if they:

The EB-5 program encourages foreign entrepreneurs to invest in a Targeted Employment Area (TEA). A TEA is defined as a rural area or an area where the unemployment rate is at least 150% of the national average. The EB-5 program has delegated to states the authority to designate various TEAs on a project-specific basis. By locating a commercial enterprise in a state-designated TEA, foreign investors sharply reduce the size of investment that is needed to qualify for a green card.

The EB-5 regulations, which were written in 1990, take a geocentric approach to defining TEAs by assuming that an enterprise's employees live near its principle place of business. In 1990, this was not an unreasonable assumption. It is today. It is now common for American workers to physically commute to jobs that are located in different metropolitan areas and to cyber-commute to jobs anywhere in the country. Internet-based employment is an efficient means of providing economic opportunities to workers who live in rural America and areas of high unemployment.

The current TEA designation process has been the subject of criticism over concerns that the EB-5 investments are not helping the program's intended beneficiaries. In response to criticism and the passage of time, DHS is updating its EB-5 regulations. DHS's Notice of Proposed Rulemaking explains that the program's reliance "on states' TEA designations has resulted in the application of inconsistent rules by different states. ... the deference to state determinations provided by current regulations has resulted in the acceptance of some TEAs that consist of areas of relative economic prosperity linked to areas with lower employment, and some TEAs that have been criticized as 'gerrymandered.'"

DHS's response to this concern is a proposal to (1) centralize TEA decisions in Washington and (2) create an even more georestrictive requirement for TEAs. The proposed rule does not consider Americans who could "commute" to work via the internet. In short, the proposed regulation doubles-down on the 1990 mindset that workers live near their place of employment, a faulty assumption that has helped fuel the "gerrymandering" issue.

There is no statutory requirement that new commercial enterprises be physically located in TEAs in order for investors to qualify for the TEA provisions of the EB-5 program. To the contrary, the statute states that investor visas "shall be reserved for qualified immigrants who invest in a new commercial enterprise ... which will create employment in a targeted employment area."

One option for the EB-5 program would be to allow a new commercial enterprise to qualify for TEA EB-5 investment, irrespective of the business's location, by committing to hire workers who live in a designated TEA. By leveraging the internet, the EB-5 program could provide technology jobs to Americans who live in rural and high unemployment areas.