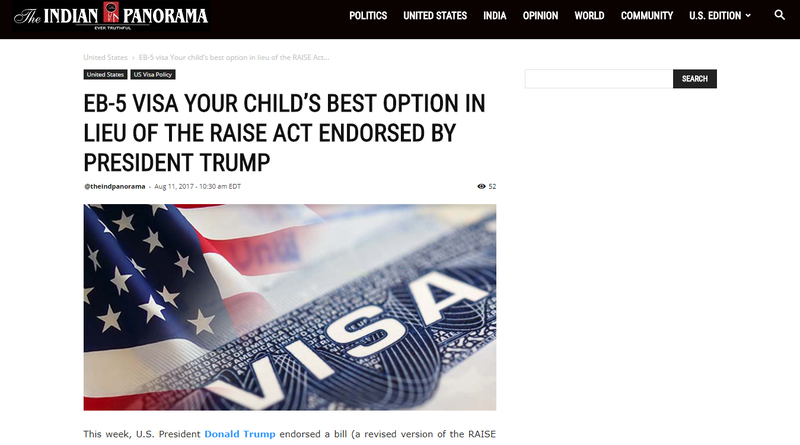 This week, U.S. President Donald Trump endorsed a bill (a revised version of the RAISE Act) that seeks to reduce levels of legal immigration to the United States by 50%. The legislation would cut the number of green cards issued annually in half, from more than 1 million to fewer than 500,000.

If passed, the bill would radically transform the U.S. immigration landscape. It would remove the pathways to permanent residency that are currently in place for the siblings and adult children of U.S. citizens and green card holders, while also limiting the opportunities available to their spouses and minor children. The new legislation would eliminate various employment-based visa programs, which would be replaced by a difficult to achieve point system. This new system would reward prospective immigrants with points on the basis of their age, level of education, extraordinary achievements (if any), high salary, and proficiency in the English language, among other criteria.

The odds of the bill being enacted are slim, as it has failed to attract additional co-sponsors and Republican leaders in Congress do not plan to vote on immigration in 2017. However, President Trump has previously applauded similar systems that are already in place in countries such as Canada and Australia.

The bill proposes to admit immigrants into the U.S. on the basis of a strict point system, where those applicants with the highest “score” (not including special circumstances) would be rewarded with U.S. residency. The devil, as they say, is in the details. The absolute must-hit number of points is 30, making it nearly impossible for Indian applicants, especially those looking to study in the U.S. Unless an international student has won an Olympic medal against the likes of Michael Phelps or is a medical research prodigy who has found the cure for cancer at a young age, attaining those 30 points will be extremely challenging.

How would the points for an average international student add up? The vast majority of aspiring Indian students are between the ages of 18 and 21, which would award them six points. If this student were completely fluent in English, they would be entitled to 12 points instead. However, to qualify for these additional points, said student would need to display a higher proficiency in the English language than the average American citizen. Additionally, he or she would need to possess a US-based professional degree and/or doctorate. Furthermore, this student would need to convince a US employer to offer him/her a salary of over 200% of the median household income.

Reaching the requisite 30 points would even prove difficult for those immigrants with “extraordinary achievements,” such an Olympic Medal or a Nobel Prize. These exceptional applicants would qualify for a mere 25 points.

In light of the above insights, LCR Capital Partners is confident that the EB-5 visa program will continue to provide the safest and fastest route to securing U.S. residency. The EB-5 Investor Visa Program is in no way dependent upon the above stipulated criteria that applies to the various employment-based visas (EB-1, EB-2, EB-3 and L-1). Therefore, the bill will in no way affect the legal immigration route of an EB-5 applicant.

About the EB-5 Program

The EB-5 Immigrant Investor Program provides permanent U.S. residency to foreign investors and their immediate families (children up to age of 21) in exchange for a $500,000 investment into a new American business or real estate project that creates 10 full-time jobs. Put simply, the EB-5 Program is the fastest, simplest and most reliable way for immigrants to become permanent residents of the United States.

LCR Capital Partners was founded in 2012 by first-generation U.S. immigrants who met at Harvard Business School. LCR is a U.S. private investment firm that provides growth capital to premier resort developments as well as the top performing brands in the franchise industry. Suresh Rajan, the CEO of LCR Capital, and his team are committed to providing high-net-worth investors with the best EB-5 processing experience possible. The LCR team is proud to offer quality investment projects that ensure both the safety of investors’ assets and the successful attainment of green cards for LCR’s clients. LCR’s primary client base comes from Latin America, India, South Africa, China, and the Middle East. As a firm founded by first-generation U.S. immigrants, LCR understands and seeks to alleviate the challenges and maximize the opportunities associated with starting a new life in the United States.