York County Casino Proposal Moves to the Next Stage 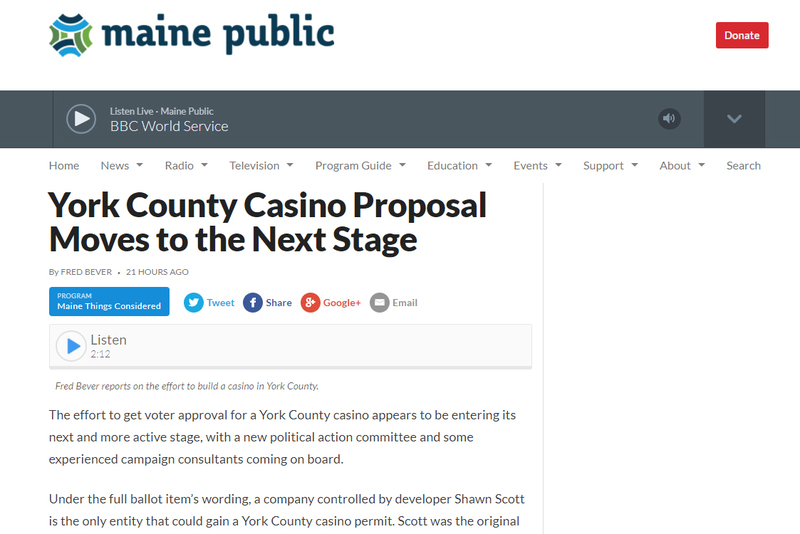 Fred Bever reports on the effort to build a casino in York County.

The effort to get voter approval for a York County casino appears to be entering its next and more active stage, with a new political action committee and some experienced campaign consultants coming on board.

Under the full ballot item’s wording, a company controlled by developer Shawn Scott is the only entity that could gain a York County casino permit. Scott was the original force behind the Bangor racino, which he eventually sold to Penn National Gaming. His new gambit has been backed by a hard-to-decipher series of partners, including his sister Lisa Scott and a complex web of on and offshore investment firms.

Now a new PAC, Progress for Maine, has been registered. It’s “decision-maker” is listed as Michelle B. Wilson: She is a principal in a firm called American General Corporation, a California-based project manager whose website also details benefits of the American EB-5 program, which gives green cards to big foreign investors in U.S. projects. The PAC is chaired by Charlene Cushing, a Farmington resident and participant in the state’s harness racing industry. And the founding firm is called Atlantic & Pacific Realty Capital, which the Bangor Daily News reports has ties to Chinese businesses and EB-5 visa efforts.

The new PAC reports more than $300,000 in debt and obligations, some of that to an international campaign consulting firm called Goddard Gunster, whose principals include Dwayne Bickford, former executive director of the Maine Republican Party.

Officials at the Maine Ethics Commission earlier this year launched an investigation into the finances behind the casino ballot referendum, in response to apparent failures to follow disclosure laws. On Thursday the commission will take up Lisa Scott’s objections to records subpoenaed that they have tried to serve on her.