Paydirt: China is trying to neuter its gray rhinos — what will that mean for Manhattan’s skyline? 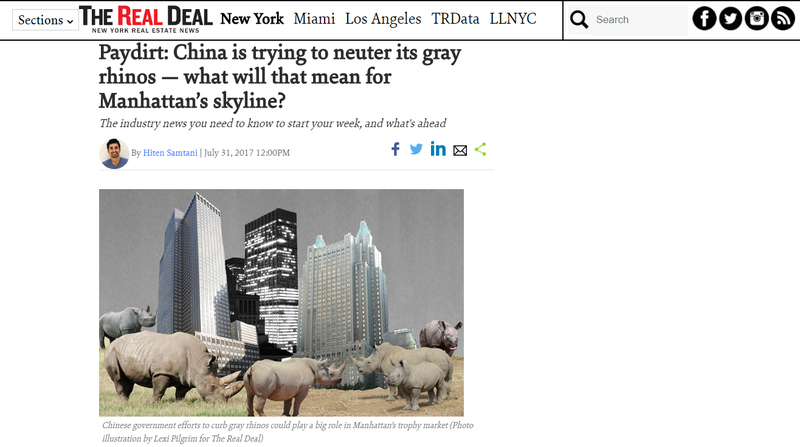 The industry news you need to know to start your week, and what's ahead

The best-laid plans of mice and men can be trampled by gray rhinos.

Gray rhinos (h/t Michele Wucker) are major structural problems in an economy that are ignored until they run amok, by which time it might be too late. In China, the term is being used to refer to the likes of HNA Group, Anbang Insurance Group and Fosun International, conglomerates that are now among the most important institutional investors in the New York skyline. They’ve amassed Manhattan trophies such as 245 Park Avenue, the Waldorf Astoria and 28 Liberty Street, pushing prices up and local players out. When they’re in the mix, sellers rejoice, developers salivate at the prospect of scoring well-capitalized partners, and brokers throw comps out the window – HNA, for example, bought 245 Park for over $1,200 a foot.

Over the past five years, Anbang, HNA, Fosun and Dalian Wanda Group have made at least $41 billion of overseas acquisitions, according to Dealogic data cited by the New York Times.

But the Chinese government is now trying to bring these rhinos to heel. Earlier this month, the official paper of the Communist Party called on regulators to act with greater urgency to prevent financial calamity. This could mean greater scrutiny on any deals these investors do, particularly overseas ones. And the increased scrutiny could lead to deals collapsing, or never getting off the ground. (China Investment Corp. was reportedly in talks to buy a 49 percent stake in 1515 Broadway, but SL Green Realty later said no deal had been reached.)

The past few months have already seen Chinese players assume soap opera-worthy roles in the tale of New York’s skyline. Anbang, for one, went from being the celebrated buyer of the Waldorf to being something of a pariah: Its chairman Wu Xiaohui went from giving speeches at Harvard and hobnobbing with Henry Kissinger to being detained by Chinese police. There was an abandoned deal for Starwood Hotels and a failed or fictitious deal for Kushner Companies’ 666 Fifth Avenue. And now, Bloomberg reports, the Chinese government has asked Anbang to sell its offshore assets and repatriate the funds – which means the Waldorf could once again be in play.

At Fosun, there was talk of a second detainment of its chairman Guo Guangchang. And at HNA, the past two weeks have seen a major reshuffling of its ownership structure after pressure from Beijing. Earlier this month, the Times reported that Bank of America decided to no longer do business with the firm.

If these Chinese rhinos retreat or are pulled back from the Manhattan trophy market altogether, there’s plenty of players waiting in the wings to take their place.  But will they be willing to invest at the same mouth-watering terms? If not, will sellers adjust quickly enough to prevent a slump?

Here’s what else you need to know to start your week.

Please, keep my money: EB-5 investors deal with a growing threat: If the money they’ve invested in development projects is returned to them too soon, they could become ineligible for green cards. Due to the popularity of the EB-5 program, there’s been an increase in visa backlogs, which means investors need their funds to be “at-risk” for periods that sometimes exceed how long developers need those funds for. A new fund aims to tackle this problem – it’s specifically designed to redeploy EB-5 capital from completed projects.

Zumper wants to be a brokerage too- and brokerages aren’t happy: Zumper, the search platform that is not StreetEasy, is hiring its own agents in a move that would allow it to cut out brokerages from the apartment-rental process. Brokerages are predictably up in arms about this move, and are warning the startup, which has raised nearly $40 million in venture capital, to stick to its knitting.

Zumper’s move is part of the growing realization among platforms that it is them, and not the brokerages, that really have most of the power. Sure, for now, brokerages still hold exclusive listings, but that’s only as long as landlords think that move makes sense. At some point, if standoffs with StreetEasy and its ilk continue, landlords may decide that they want their listings where the people are, instead of in the hands of firms who may not be able to deliver the eyeballs. We’re seeing a lot of huffing and puffing from some of the brokerages, but they may not have the lungs to blow the house down.