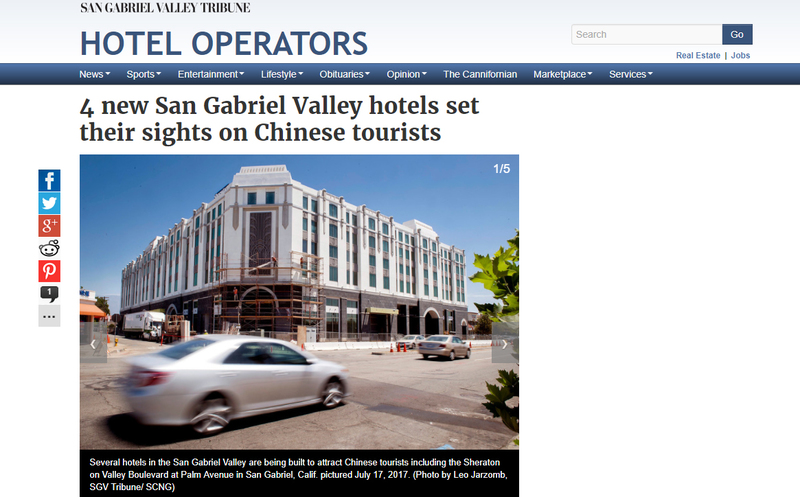 Several hotels in the San Gabriel Valley are being built to attract Chinese tourists including the Sheraton on Valley Boulevard at Palm Avenue in San Gabriel, Calif. pictured July 17, 2017.

Four hotels are coming to Monterey Park and San Gabriel, all with the aim of catering to Asian tourists.

Some are closer to their grand openings than others.

Construction for the Sheraton Los Angeles San Gabriel hotel, at 303 E. Valley Blvd., is in its final stages, and the hotel is set to open November, hotel manager Wanda Chan said. It will feature 288 rooms, a meeting space, restaurants and a Starbucks.

Just down the block, the Hyatt Place hotel at 101 W. Valley is expected to open by late 2018, property manager Arnold Sei said.

Three of the four hotel projects are being backed financially by Chinese investors through the federal EB-5 investment program, which is designed to attract foreign investments. The three include the Sheraton and two hotel projects in Monterey Park: a Courtyard by Marriott Hotel set to open in 2018 and a Doubletree Hotel, which doesn’t have an opening target date yet.

Management behind all three hotels are hoping to attract Chinese tourists.

According to the International Trade Administration, at least 5 million Chinese travelers are expected to visit the United States by 2021 — making China the top overseas visitation market in the U.S.

“Tourism is a big industry, and we are fortunate to be in the center of it,” said San Gabriel’s Economic Development Director Angelica Frausto-Lupo.

Around 350,000 tourists from Asia come into San Gabriel annually, she said. Like tourists from around the world, many Asian tourists travel to the Southland to see the main attractions in Los Angeles. But they prefer to stay in the San Gabriel Valley because of the familiar Asian surroundings and food.

“A lot of that tax money goes to the community and its residents,” she said. “It provides funding for public safety, repairing and other underfunded public projects.”

It is estimated San Gabriel will collect $69 million over the next 30 years from the Sheraton hotel alone, mainly through the occupancy tax, Frausto-Lupo said.

Additionally, the hotel will create around 200 jobs, according to the Hazens Group, a development company.

The Monterey Park hotels are expected to similarly stimulate the local economy. The Courtyard by Marriott, whose subterranean parking structure is currently under construction, is expected to generate $2 million per year in tax revenue and create 865 jobs, project director Scarlett Ku said.

Meanwhile, cities have come up with a fail-safe to ensure their hotels succeed, Allred said. Most require developers to commission a marketing study to prove the demand for hotel rooms is there before projects are approved.

Despite Hyatt Place on Valley Boulevard not being funded by EB-5 money, Sei said the hotel still aims to lure Asian tourists.

“Our first hotel in San Gabriel had very good occupancy, like 90 percent,” Sei said. “So we wanted to build another one, because there’s a huge demand from Asia and to make money.”

Allred said he knows of many hotels currently under construction via the EB-5 program, and he envisions the development spreading eastward in the San Gabriel Valley.