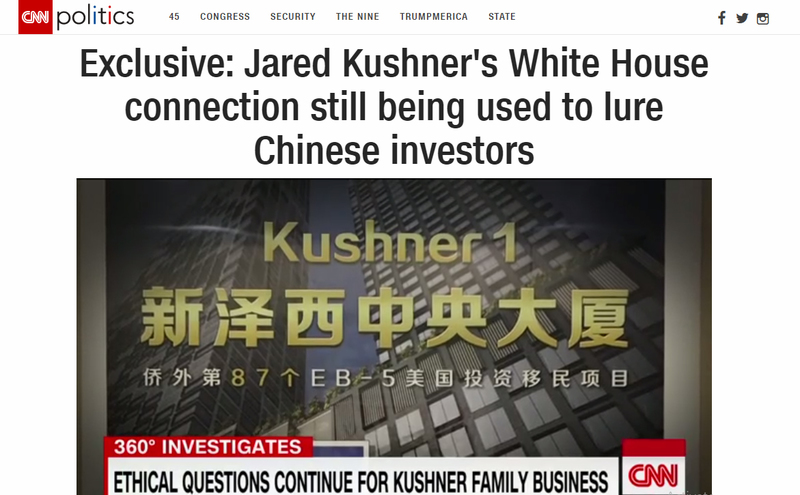 Jared Kushner's status as a top aide to President Donald Trump was used to lure Chinese investors to his family's New Jersey development, even after his family's company apologized for mentioning his name during a sales pitch in May, CNN has found.

References to Kushner are part of online promotions by two businesses that are working with Kushner Companies to find Chinese investors willing to invest in the 1 Journal Square development in exchange for a US visa.

The promotions are posted in Chinese and refer to Kushner Companies as "real estate heavyweights," going on to mention "the celebrity of the family is 30-something 'Mr. Perfect' Jared Kushner, who once served as CEO of Kushner Companies."

One posted online in May by the company US Immigration Fund, a private business based in Florida, also contains a reference to Kushner's appearance on the cover of December's Forbes Magazine, under the headline "This guy got Trump elected." The post was removed shortly after CNN contacted the company for comment. 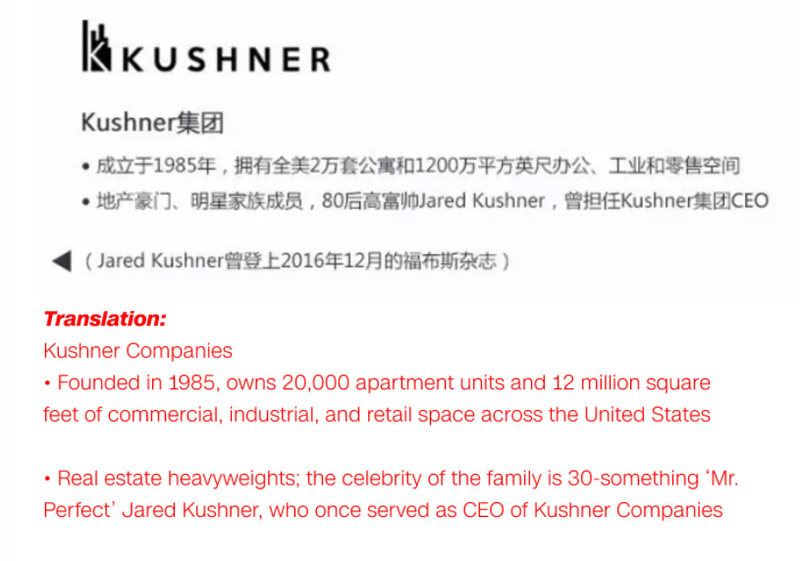 The promotions are aimed at bringing in investors who pay at least $500,000 apiece and in exchange get US visas, and potentially green cards, for themselves and their families if the development meets certain criteria. The deals are part of a legal US government program called EB-5, which grants up to 10,000 immigrant visas per year.

One webpage posted in March by Chinese company Qiaowai that remains on the company's page on the popular Chinese social media site WeChat mentions Trump and suggests he supports the program: "Even some members of Trump's family have participated in the growth of the EB-5 program ... the "Kushner 88" panoramic New Jersey apartment project ... The lead developer on the now-completed project was Kushner Companies which is linked to Trump's son-in-law, Jared Kushner." It goes on to say, "Given this, in the Trump era, the EB-5 program is likely to receive support and be expanded." 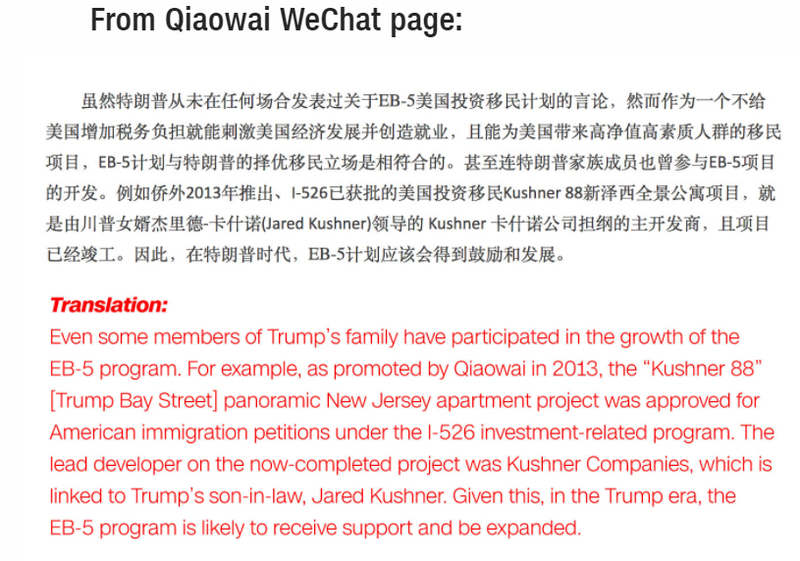 A Kushner Companies spokesperson, in response to CNN's questions about the webpages, said "Kushner Companies was not aware of these sites and has nothing to do with them. The company will be sending a cease and desist letter regarding the references to Jared Kushner."

A former White House ethics expert tells CNN the EB-5 program already raises a potential government-backed quid pro quo -- favorable immigration status in exchange for investment dollars. And he says any use of the President's son-in-law as a marketing tool is ethically unacceptable.

"What is not authorized is any arrangement where someone gets preference for their visa if they give money to a company that is controlled by the family of a United States government official," said Richard Painter, a former chief ethics lawyer for President George W. Bush.

"And unfortunately," says Painter, "that implication was made in the selling efforts for this project."

Painter is referring to an investment "road show" that Nicole Meyer attended in May in Beijing. Meyer, the sister of Jared Kushner, was speaking at an event in which she was trying to attract wealthy Chinese investors to the 1 Journal Square project.

During the presentation, Meyer reminded investors of her brother's recent role in American politics: "In 2008, my brother Jared Kushner joined the family company as CEO," Meyer told a crowd, adding he "recently moved to Washington to join the administration."

The comments coincided with a visual display, which included a photograph of Trump.

Meyer's comments led to strong criticism that the Kushner family was using Jared Kushner to attract investment dollars through the EB-5 program.

The company quickly apologized, and separately, Jared Kushner's attorney released a statement saying Kushner had no knowledge of the promotion and was no longer involved financially in the 1 Journal Square project.

"As previously stated, he will recuse from particular matters concerning the EB-5 visa program," Kushner's attorney, Blake Roberts, said in a statement.

US Immigration Fund, a company based in Jupiter, Florida, seemed to blame others for the post, saying in a statement, "The post in question was originally posted by a 3rd party immigration consultancy firm on its company WeChat and was reposted to USIF's WeChat by the company's Chinese social media consultant. The post is several months old and hasn't had any interaction by followers, however, it has since been removed from the company WeChat."

Qiaowai, a Chinese immigration company that organized the events where Kushner's sister spoke, did not respond to CNN's request for comment. The webpage on its WeChat site that references Kushner remained online as of Wednesday afternoon.

EB-5 investment advisor Michael Gibson tells CNN it makes sense that the companies marketing the Kushner project in China have continued to use Kushner's name to promote their project, because he says Chinese investors are drawn to developments they believe are backed by individuals with government connections: "They want to make sure they get the green card," Gibson told CNN. "So if they see a public official associated with the project that gives them the impression that this project is safe enough for them to invest in."

The EB-5 program has faced criticism for straying from its original intent. The program was designed by Congress in the 1990s to bring foreign money into rural and blighted urban areas to spark development and job growth.

After the economic recession of 2008, the program began expanding to become a low-interest source of income for developers who have used EB-5 investment money to fund high-end residential towers and retail projects in areas like Manhattan, Jersey City, New Jersey, and Miami.

Gary Friedland, a scholar in residence at New York University's Stern School of Business who has studied the program, said developers have found ways to manipulate census tract data to place their projects within "targeted employment areas," which legally reduces the amount investors must pay -- down from $1 million to $500,000 -- to qualify for EB-5 benefits.

Emails obtained by CNN from the New Jersey Department of Labor and Workforce Development show a representative for US Immigration Fund in January asked a New Jersey official to issue a letter certifying the Kushner's 1 Journal Square as within an area with low employment.

After an official responded that the project did not qualify due to its location within a census tract with an unemployment rate below the national average, a consultant for another company asked that the state combine six census tracts together. Days later, the state approved the Kushner Companies' project, documents show.

Friedland says practices like this allow luxury developers to take advantage of incentives meant to lure investments to lower-income areas: "The money flows to affluent areas, not the targeted areas Congress intended to benefit," he said.

On June 1, three Democratic lawmakers wrote a letter to Kushner Companies current president Laurent Morali asking for an explanation on the company's ongoing use of the EB-5 program and the nature of its relationships with Qiaowai and US Immigration Fund.

Kushner Companies has not yet responded to the letter, according to the office of Sen. Patrick Leahy, D-Vermont.