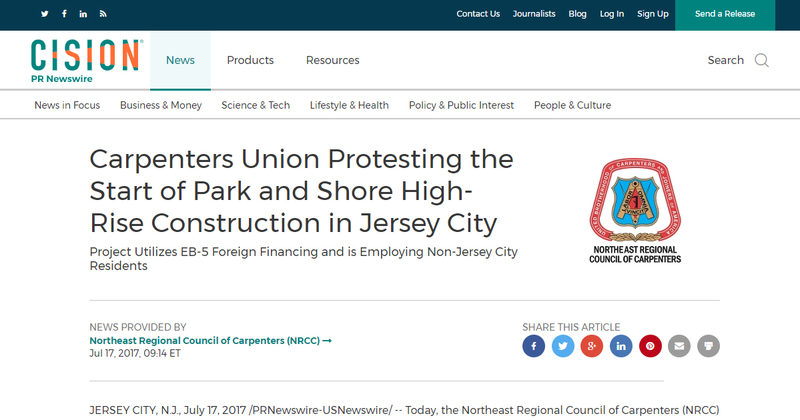 Today, the Northeast Regional Council of Carpenters (NRCC) will begin a campaign to raise awareness for the business and employment practices of Structure Tech, the subcontractor responsible for construction of the concrete super structure, on the new 37-story Park and Shore residential/retail development at 75 Park Lane in Jersey City.

NRCC members will begin picketing activities outside of the Park and Shore job site today to raise awareness to the fact that Structure Tech is failing to pay the area wage standards, health and retirement benefits to its workers and employing workers from out of State to work on the Jersey City project.

"Simply put, this is another example of a project that exploits middle class workers, uses cheap, non-local labor and banks on foreign investors for hundreds of millions of dollars in funding in exchange for U.S. visas," said Bob Satriano, NRCC's Director of Organizing. "Our organization fights every day to protect the wages, benefits and retirement of hardworking middle-class Americans and we want to raise awareness to just what's going on behind the scenes on high-rise construction projects like this one in New Jersey and elsewhere throughout the country. Structure Tech is not paying area standard wages and not employing local Jersey City workers who have families here, spend money in the City and pay taxes to our State."

The Park and Shore luxury development, near the Hudson River waterfront, is utilizing controversial EB-5 visa financing from overseas investors in order to build the project. Two years ago, Strategic Capital, the United States arm of Chinese State Construction Engineering Corporation, raised $110 million from the EB-5 program from 220 foreign investors for the development of the $442 million Park and Shore development. The EB-5 program offers visas to foreign investors who provide more than $500,000 to a development project that generates more than 10 jobs per investor.

During the concrete super structure construction phase of the project, Structure Tech, based in Yonkers, NY, will not be using local labor and will be employing approximately 100 workers from outside of the State of New Jersey.

"Northeast Carpenters' Local 253 has nearly 135 Jersey City residents who could have benefitted themselves and their families by working on a large development project like this," said Alex Lopez, NRCC's Hackensack Team Lead and Council Representative. "Our carpenters have the skills, training and expertise necessary to safely build a project like this one and have worked for decades with law abiding and honorable contractors on projects throughout North Jersey."

Of the approximately 135 Jersey City carpenters, 54 of them are young adults enrolled in the NRCC's 5-year Apprenticeship Training Program; a rigorous program that requires individuals to annually complete hundreds of hours in the classroom and more than 1,500 to 2,000 hours of on-the-job training with skilled union carpenters.

The Northeast Regional Council of Carpenters (NRCC) represents nearly 40,000 hardworking men and women in Delaware and New Jersey and portions of Maryland, New York, and Pennsylvania. NRCC is one of the largest trade unions on the East Coast. The NRCC equips professional men and women carpenters with the skills, training and quality workmanship that are demanded in today's construction industry.