Half of Chinese millionaires want to move abroad, but NYC is not their top destination 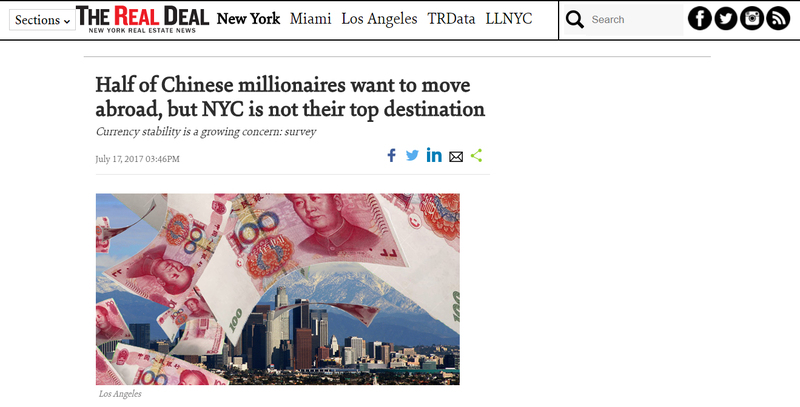 Around half of wealthy Chinese are toying with the idea of moving overseas, but New York is not their top destination in the U.S.

Los Angeles is the most popular city within the U.S. among Chinese with a net worth of more than $1.5 million who want to move their families out of the country, according to a survey from Hurun Report. New York ranks fourth, behind Seattle and San Francisco. The United States was still the most popular destination, ahead of Canada, the United Kingdom and Australia.

“Education and pollution are driving China’s rich to emigrate,” Hurun’s Rupert Hoogewerf told CNBC. “If China can solve these issues, then the primary incentive to emigrate will have been taken away.”

Worries over the stability of China’s currency are also pushing more Chinese to consider emigration. Over 80 percent of Chinese millionaires told Hurun they are worried about currency devaluations, up from 50 percent a year earlier, CNBC reported.

The Real Deal previously reported that capital controls designed to stabilize China’s currency have made it harder for individuals to move money out of the country and buy properties in New York. The controls have hurt the Big Apple’s luxury condo market, which has come to rely in part on wealthy Chinese buyers. Meanwhile the EB-5 program, a popular tool for wealthy foreigners to get U.S. visas, faces an uncertain future.