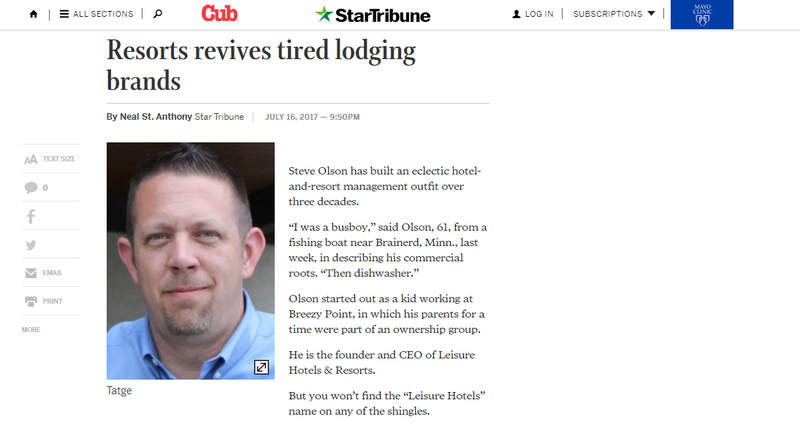 “I was a busboy,” said Olson, 61, from a fishing boat near Brainerd, Minn., last week, in describing his commercial roots. “Then dishwasher.”

Olson started out as a kid working at Breezy Point, in which his parents for a time were part of an ownership group.

He is the founder and CEO of Leisure Hotels & Resorts.

But you won’t find the “Leisure Hotels” name on any of the shingles.

“We build the brands of the owners,” said Leisure President Jamie Tatge. “And each resort is owned by a different [owner] partnership.”

Olson and Tatge and 2,500 Leisure Hotel employees, including 700 in Minnesota, manage a six-state portfolio of 14 properties that produce $125 million in annual revenue.

In June, Leisure moved world headquarters from Kansas City, Kan., to Baxter, near Brainerd in the central Minnesota lakes region.

That move was largely to accommodate Tatge, 42. He also is Olson’s heir apparent as CEO. Olson hired Tatge in 2006 from nearby Grandview Lodge to run day-to-day operations at Leisure. In CEO succession talks, Tatge didn’t want to move his family from the Brainerd area.

Fine with Olson, who first settled in Kansas because that’s where he was managing a hotel years ago. Olson also has a summer place near Brainerd.

Olson started Leisure 33 years ago when a Kansas hotel he was managing got into financial trouble.

“I negotiated a buyout of that Kansas hotel and it worked,” Olson recalled. “And then later, in the 1980s and early 1990s, we started buying ‘distressed’ properties from the Resolution Trust Corp.,” the federal receiver of assets owned by failed savings and loans.

“We’ve been doing that kind of work since, including bankruptcy work, as well as developing and managing properties for other owners.”

Leisure manages a diverse mix of properties, from Minnesota to Vermont. A few with interesting histories.

For example, in 2015, Olson received a call from a bankruptcy-court receiver about managing two Vermont ski resorts that were used to bilk 800-plus foreign investors out of $200 million.

The U.S. Securities and Exchange Commission termed it a Ponzi scheme involving the sale of EB-5 visas to foreign nationals who invest at least $500,000 in U.S. projects that create at least 10 jobs.

Problem was, according to investor lawsuits that led to a $150 million settlement by securities firm Raymond James last spring, the owner and a Raymond James branch manager kept much of the $350 million raised for the project.

The Jay Peak resort was mismanaged, the finances were in tatters and it was losing money, recalled Olson.

The resort had closed amid the scandal. The court-appointed receiver needed to get the complex running again. He hired Leisure.

“It’s been a challenge and a great experience,” Olson said of the fast revival of the 1,000-employee hotel-conference-golf-and-ski complex. “We started out with no cash and everybody was owed money. We went in and talked to the employees and went in with the receiver and a forensic team and tried to sort it out. The old owners were just interested in bringing in money.

“Over the first full year, we got it up to about $50 million in sales and increased the cash operating profit to about $10.5 million,” Olson said.

Michael Goldberg, the court-appointed receiver, said in a prepared statement that Leisure “organized the accounting, which was a mess and made the hotel more profitable. The whole place ran smoothly under very difficult circumstances.”

The other operations have been smaller and less dramatic. Leisure specializes in reviving tired brands, facilities and operational turnarounds.

For example, Chase on the Lake, a century-old resort in Walker, Minn., was destroyed by fire in 1997.

The owners hired Leisure for a $30 million rebuild. And Leisure is still running the joint.

The $6 million-revenue resort annually serves 10,000 guests who participate in fishing boating and year-round sports. Chase also is a hub for the annual winter International Eelpout Festival that attracts 10,000 participants and spectators, 10 times the size of host community Walker.

Leisure also manages Pier B on Lake Superior’s harbor in Duluth, once part of 130-year-old industrial wharf area that served the timber, mining and other that has been slowly converted to lakefront recreation, commercial, housing and lodging developments. The several-acre Pier B site is an interesting conversion of a once-shuttered industrial site to a vibrant piece of the next-generation waterfront, complete with all the amenities.

“We’re the operators and we’re in the hospitality business, so we have to make it sparkle and never forget the guests are on vacation,” Tatge said. “It takes about a year for us to get our arms around a place. It can take up to three years to stabilize cash flow.

“Each ownership group is different as is each of the properties. We don’t go after one-size-fits-all. That’s what makes it challenging and fun.”

Leisure also runs the Lodge at Giants Ridge in Biwabik, the Hotel Grand Victorian in Branson, Mo., and a Holiday Inn Express in Dodge City, Kan.