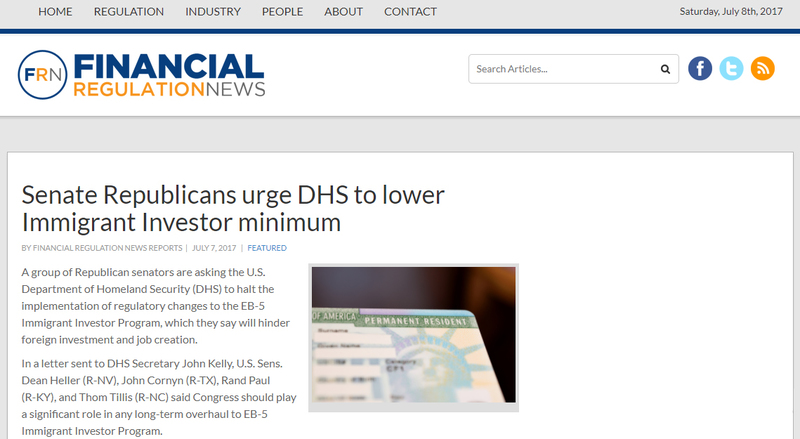 A group of Republican senators are asking the U.S. Department of Homeland Security (DHS) to halt the implementation of regulatory changes to the EB-5 Immigrant Investor Program, which they say will hinder foreign investment and job creation.

“We respectfully ask that the agency not move forward with the proposed Obama administration rule that will significantly change the program and jeopardize the ability of the program to continue to draw foreign direct investment to the U.S. and create jobs in communities around the country,” the senators wrote.

Currently, a foreign investor can invest a minimum of $500,000 in a U.S. business and be granted green cards for the investor and his family. In January, the DHS raised the minimum investment required to get green cards to $1,350,000.

“The issue of raising minimum investment levels alone will likely undermine the program’s functionality. The levels suggested … are substantially higher than what has been discussed and proposed in Congress in the past, and there is no transition period for stakeholders to adjust their business practices to accommodate this increase in minimum investment amounts. This type of shock will be detrimental to the EB-5 program’s future viability and will be detrimental to employment in our states,” the senators wrote.

They believe the best way to reform the program is through the legislative process with input from the administration and stakeholders.

“DHS and the broader administration should provide clarity to delineate proper stakeholder behavior and implement programmatic goals through first, the legislative and then, the regulatory process,” the senators wrote.