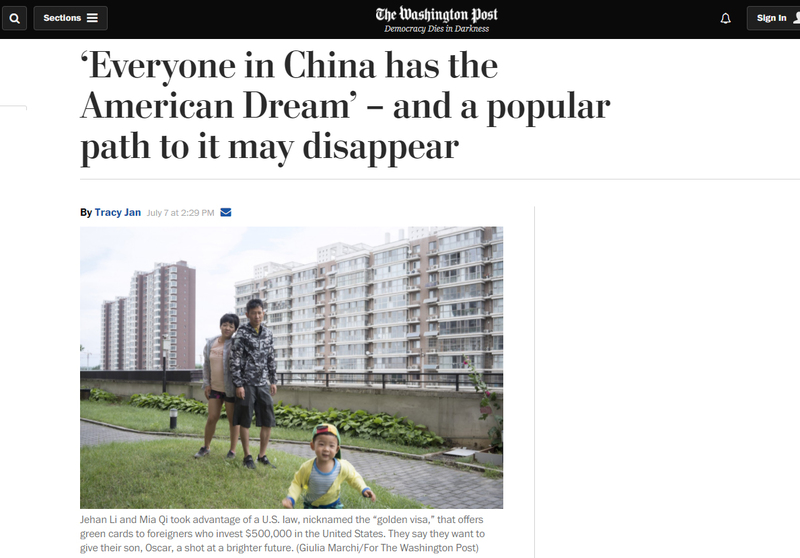 Jehan Li and Mia Qi took advantage of a U.S. law, nicknamed the “golden visa,” that offers green cards to foreigners who invest $500,000 in the United States. They say they want to give their son, Oscar, a shot at a brighter future.

Their son was barely a year old when Jehan Li and Mia Qi plunked down a half-million dollars for the boy to have a shot at a brighter future in America — away from the grinding competition of a Chinese education and this city’s smog-choked air.

Last December, having made just a single visit to the United States on their honeymoon, the Chinese couple took advantage of a U.S. law, nicknamed the “golden visa,” that doles out green cards to foreigners who invest $500,000 in the United States.

Critics say the fast track to citizenship favors the ultra-rich. It is also emerging as one of the most attainable paths to U.S. residency for members of China’s growing professional class — and now it could disappear.

The nearly three-decade-old program has come under new scrutiny in recent months, in part because of a sales pitch to Chinese investors by White House senior adviser Jared Kushner’s family real estate business.

Congress and the Trump administration are considering changing the rules for the investor visas as a means of cracking down on money laundering and visa-for-sale fraud. Potential changes, such as raising the investment threshold, would have little impact on China’s wealthiest. But they could shut out families such as Li and Qi, who despite riding the curve of upward socioeconomic mobility in China still see the United States as their best opportunity and this visa program as their best option.

The debate over the investor visas raises basic questions about the purpose of U.S. visa policies. Some say this program should be eliminated in favor of other immigrant groups, such as high-skilled workers or refugees escaping persecution — and not let people buy their way into the United States. Others say those with substantial amounts of money are best positioned to boost the American economy, by investing their wealth and creating jobs.

“In the end, the simple truth is the government is looking for the money. And that may unfortunately exclude people who can no longer afford it, even if they may be the best people in the world.”

During his lunch break at a Pizza Hut in one of Beijing’s ubiquitous shopping malls, Li, a 38-year-old civil engineer, explained the draw of the EB-5 investor visas for upwardly mobile Chinese without vast inherited fortunes. 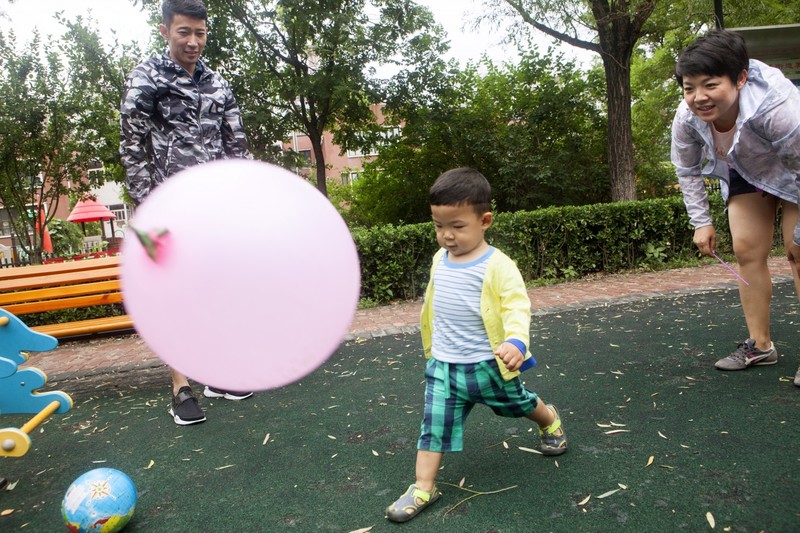 Jehan Li and Mia Qi and Oscar in the courtyard of the apartment building where they live in Fengtai district of Beijing.

“There are a lot of ways to immigrate to America, but this EB-5 program is the easiest,” said Li, who invested in a Miami residential skyscraper under construction.

The only requirement is cash. Unlike other immigration visas, one does not need to have relatives in the United States or have any extraordinary ability, educational degree or professional achievement.

The EB-5 program became attractive to U.S. real estate developers after the 2008 financial crisis as a reliable source of cheap capital when bank loans were difficult to come by. The developers pay low annual interest on investments from EB-5 visa holders, typically just 4 to 8 percent compared with 12 to 18 percent for conventional financing. After authorities confirm that the money has created at least 10 American jobs, a visa holder will be eligible for permanent residency — and to recoup his or her investment.

“It is good to own some U.S. dollars as the U.S. economy recovers from the financial crisis,” Li said.

Far from being scions of China’s ruling class, Li and his wife, a customer service representative at a Beijing real estate company, earn about $100,000 a year. That is well above average for Beijing but not in the ranks of the wealthiest elites.

They were able to scrounge up the $500,000 by selling a four-bedroom house on the outskirts of Beijing that Li’s parents had helped him buy a decade ago. (It is common in China for parents to help their children, especially sons, buy homes.)

The family of three rents a modest, two-bedroom high-rise apartment in a middle-class compound in the southwestern part of China’s sprawling capital city. Although homeownership is prized among Chinese as a secure financial investment, Li and Qi said they view renting as a sacrifice for the sake of their son, Oscar.

The couple, who married in 2014, said they committed to immigrating during their ­10-day honeymoon in California, where they soaked up the grandeur of Yosemite National Park, visited the Hollywood Walk of Fame, and even checked out the University of California at Los Angeles.

“We went to America to vacation with the purpose of understanding the country,” said Li, whose notions about the United States came only from movies and television news. “The values of independence, equality, freedom and democracy have attracted me deeply. I was already hoping to raise our child there.”

Qi, also 38, said they knew then that they needed to find a way for their future child to study in America. 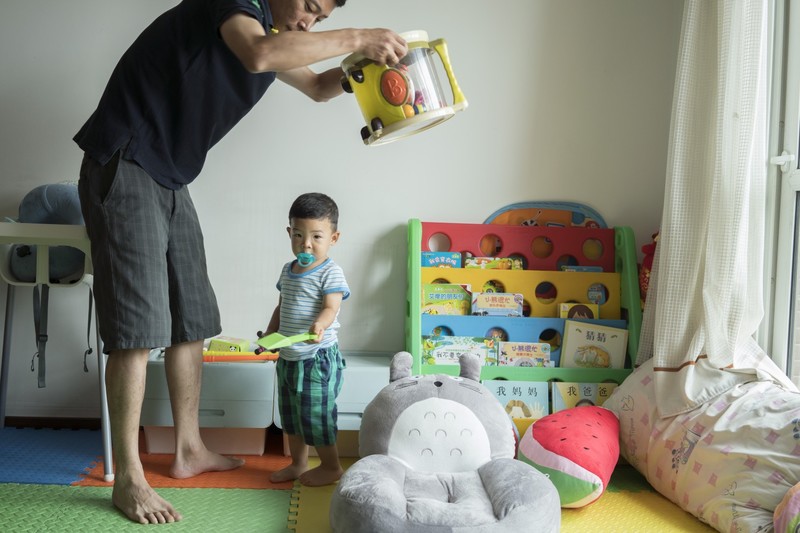 Jehan Li, 38 years old, plays with Oscar. “Everyone in China has the American Dream,” he says.

Of the 8,500 EB-5 visas issued in 2016, 82 percent went to investors from mainland China, according to the State Department. A decade ago, Chinese nationals accounted for just 12 percent of such visas.

Chinese immigration brokers say upper-middle-class investors have flocked to the program in recent years as their incomes increased and their real estate appreciated.

But that route to the United States may soon close for families such as Li and Qi.

Congressional authorization for the EB-5 visa expires in September, and lawmakers, as well as the Department of Homeland Security, are weighing new rules that could raise investment requirements from $500,000 to as much as $1.35 million.

Sen. Dianne Feinstein (D-Calif.), who assailed the investor visa as “citizenship for sale” to the wealthiest bidders, has introduced a bill with Sen. Charles E. Grassley (R-Iowa) to scrap the program.

Legislators who have long agitated for change were further riled in May after one of Kushner’s sisters pitched a New Jersey luxury apartment project managed by the family’s real estate company to potential Chinese investors in Beijing.

Such sales presentations by U.S. developers seeking to woo Chinese investors are common, immigration brokers say. But the Kushner Companies event drew criticism for attempting to cash in on Kushner’s White House connections. One speaker advised those in attendance to invest early — under the “old rules” requiring $500,000 — in case regulations change under President Trump, Kushner’s ­father-in-law.

Michael Short, a White House spokesman, told The Washington Post that the Trump administration is “evaluating wholesale change of the EB-5 program,” including “exploring the possibility of raising the price of the visa.”

The uncertainty has prompted a scramble among some Chinese investors, said Jerry Liu, an immigration consultant in Beijing.

“Right now, the market is really hot, and more people can afford it because of China’s growing economy,” Liu said. “Everyone in China has the American Dream.”

Because of a cap on the number of visas by nationality, Chinese applicants must wait seven to 10 years from the time they invest to when they secure green cards, Liu said. The program has a big backlog; until 2015, the wait time was five years.

About a third of Chinese applicants are even applying in their teenage children’s names, anticipating that their green cards would not be available until they are adults and can move to the United States on their own, said Ronnie Fieldstone, a Miami attorney representing developers and Chinese immigration agents involved in EB-5 projects.

Li and Qi are relieved to have gotten in line before the United States changes the investment rules.

The Miami development they invested in is slated to be finished in early 2019, according to Paramount Miami Worldcenter, the developer. Construction is complete for 12 of its 60 stories. More than 60 percent of the luxury condominium’s 500 units have sold.

Once the U.S. government approves the family’s petition, they will receive two-year conditional green cards.

The couple have already researched housing and schools in Los Angeles, where they hope to settle. And they are exposing Oscar, 21 months old, to English through nursery songs. He is learning the alphabet and likes to sing a counting song about catching fish.

“We hope to be in America,” Qi said, “by the time our son finishes elementary school.”