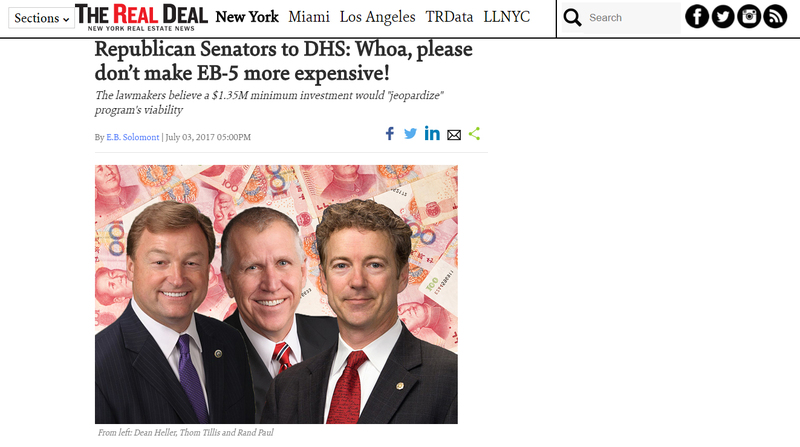 The lawmakers believe a $1.35M minimum investment would "jeopardize"

A group of Republican senators want the Department of Homeland Security to roll back an Obama-era proposal that would drastically make it more expensive for foreign investors to participate in the EB-5 visa program.

In late January, the department proposed a series of reforms to the program, which grants green cards to foreigners who invest in U.S. real estate projects and has been a popular financing mechanism for New York City developers. A key element of the proposal, which has been debated for years, would require foreigners to invest $1.35 million instead of $500,000.

Sens. Dean Heller of Nevada, John Cornyn of Texas, Rand Paul of Kentucky and Thom Tillis of North Carolina asked DHS to withdraw the rule, saying $1.35 million is “far higher” than what’s been discussed, and the rule doesn’t allow for any transition period for stakeholders. “This type of shock will be detrimental to the EB-5 program’s future viability and will be detrimental to employment in our states,” they wrote in a letter to DHS Secretary John Kelly. If enacted, the rule would “jeopardize the ability of the program to continue to draw foreign direct investment to the U.S.,” the senators wrote.

While the EB-5 program is imperfect, reform should be achieved through a legislative process, they said. The current program is up for renewal on Sept. 30, 2017.

A top regional center chief in February told The Real Deal that a plan to raise the minimum investment to $1.35 million would likely result in a 90 percent dropoff in demand.

The Trump administration and presidential adviser and son-in-law Jared Kushner faced backlash in May after Kushner’s sister, Nicole Kushner Meyer, invoked her family’s ties to the White House during a pitch to Chinese investors. Kushner Companies has been seeking $150 million from EB-5 investors for One Journal Square, a 1,467-apartment tower in Jersey City that has a $1 billion price tag.