Heaven does not have an EB-5 visa program 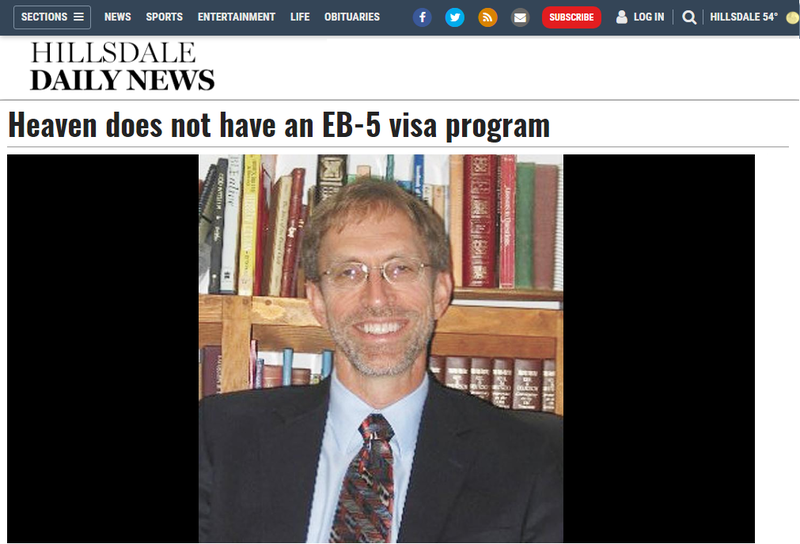 In recent weeks, many of us learned for the first time that the United States Citizenship and Immigration Services offers an employment-based visa with permanent resident status to foreigners who are willing to invest large sums of money in commercial enterprises in the U.S. — commercial enterprises capable of employing at least ten full-time U.S. workers.

The program, known as the EB-5 Immigrant Investor Program, offers foreigners with at least $1 million to invest the possibility of receiving preferential status, compared to foreigners who wish to immigrate to the U.S. for other reasons (like their safety or the safety of their families).

In an op-ed for Roll Call, Senator Diane Feinstein wrote, “simply put, EB-5 sends a terrible message to the millions of immigrants patiently waiting their turn to enter the United States legally...It says that American citizenship is for sale, and that’s not what our country stands for.”

It’s not often I agree with Senator Feinstein, but this time I think she’s right.

My daughter-in-law is an immigration attorney working for a non-profit in Texas, helping (mostly) Spanish-speaking people from Mexico and Central America seeking to enter the U.S. These people are often trying to escape drug violence or domestic abuse (sometimes at the hands of American citizen husbands). She frequently sees their applications for status denied.

Whether those denials are just or not, I don’t know. It probably differs from case to case and, even then, is open to debate. But place the abused and exploited undocumented immigrant from Guatemala alongside the millionaire from China, witness the different treatment they receive, and one can’t help but feel something is wrong. The EB-5 applicant leaves his Mercedes with the valet and eats in an upscale Shanghai restaurant while his lawyers handle his visa application. The Central American mother of three sits alone in a detention center, afraid and confused, with no one to plead her case.

There are, of course, arguments to be made for and against EB-5, and good people will come down on opposing sides. But this I think I can say without fear of contradiction: the kingdom of heaven does not have an EB-5 program. No one can buy their way in. Heaven is not selling citizenship status to would-be investors, and its economy has no need of a boost.

Yet there’s no shortage of religious hucksters selling entrance visas in the name of the king of heaven. Some are blatant about it, like the old-time evangelist who kept an enormous register on a table in the front of the meeting hall, which he called the Book of Life. For a donation to the ministry, he promised to write a person’s name in the Book of Life.

Even without the hucksters, the idea that entrance into heaven can somehow be bought remains popular. Many people think of religion as a currency God accepts: performing rituals, attending church, lighting candles, saying prayers – it all adds up to a hefty investment that may just translate into citizenship status in heaven. People assume there must be some logical connection between such things and heavenly citizenship, but what that connection could possibly be remains (to their minds) inscrutable.

Other people believe God deals in good deeds. With so many religions, they conclude, it can’t possibly matter which you hold. The important thing is human kindness. It has purchase power. Pilgrimages and fasts and baptisms – they’re not legal tender everywhere; but charity is. Good deeds add up. Get enough of them and heaven will issue a green card.

The biblical writers, however, are surprisingly nonchalant about religion. The primary word for religion is only used three times in the entire New Testament. Likewise, biblical teaching denies that good deeds have any buying power at all. Good deeds characterize the lifestyle of people who already have heavenly status; they are not a means for procuring it.

In fact, heavenly status is not procured at all – it is received. It is a gift, gratis. To enter the kingdom of heaven, a person need only acknowledge the king. One’s sins can’t keep a person out, and one’s good deeds can’t get a person in. Faith in heaven’s ruler (the biblical word is “Lord”) is the sole criterion.

Shayne Looper is the pastor of Lockwood Community Church in Branch County.