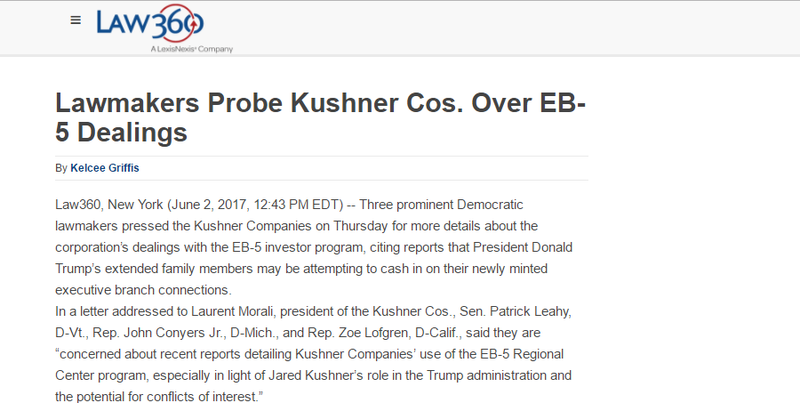 Three prominent Democratic lawmakers pressed the Kushner Companies on Thursday for more details about the corporation’s dealings with the EB-5 investor program, citing reports that President Donald Trump’s extended family members may be attempting to cash in on their newly minted executive branch connections.

In a letter addressed to Laurent Morali, president of the Kushner Cos., Sen. Patrick Leahy, D-Vt., Rep. John Conyers Jr., D-Mich., and Rep. Zoe Lofgren, D-Calif., said they are “concerned about recent reports detailing Kushner Companies’ use of the EB-5 Regional Center program, especially in light of Jared Kushner’s role in the Trump administration and the potential for conflicts of interest.”

Last month, reports surfaced that the sister of Trump’s son-in-law, Jared Kushner, dropped Kushner's name while pitching a New Jersey housing project to a group of potential investors in the EB-5 program, which allows foreign nationals who invest at least $500,000 in a U.S. business to obtain green cards.

Kushner’s sister, Nicole Meyer, a principal at Kushner Cos., was reported as having made a pitch to drum up millions for a Jersey City housing project to Chinese investors at a hotel in Beijing.

The incident raised questions about whether Meyer and Kushner Cos. had leaned on their association with Kushner to entice investors. The company eventually released an apology, saying in a statement it was not Meyer’s intention to have the name-drop seen as “an attempt to lure investors.”

But in the Thursday letter, the lawmakers further expressed concerns that the corporation might be “marketing familial relationships with the White House” to gain access to investors.

The letter asks what steps the Kushner Companies have taken to ensure that no one “exploits” the recent executive branch connections. It also asks how many people committed to invest after Meyer gave the presentation. It also points out that the Chinese migration agency responsible for marketing a Kushner EB-5 project in China supposedly reported that Meyer’s presentation was a hit, resulting in a “buying rush.”

The lawmakers additionally called attention to the Kushner Cos.’ reported involvement with the U.S. Immigration Fund, a group said to be on the “forefront” of blocking EB-5 program reforms. They asked whether the president’s son-in-law was ever involved in discussions about regulations related to the program and whether the company engaged in lobbying on the subject.

The letter also asks the company to elaborate on the way it has drawn maps for its proposed EB-5 projects, suggesting it may have essentially gerrymandered the maps to include lower-income areas to qualify for targeted employment area incentives.

Thursday’s letter isn’t the first raised eyebrow over the Kushner Cos. EB-5 involvement.

Shortly following reports of Meyer’s presentation, Sen. Chuck Grassley, R-Iowa, wrote a letter to the Trump administration, saying Meyer’s comments “could seem to imply that foreign nationals who invest with the Kushner company will receive special treatment and expedited approval.”

He said that the incident serves as further proof that the EB-5 investor program is still sorely in need of reforms.