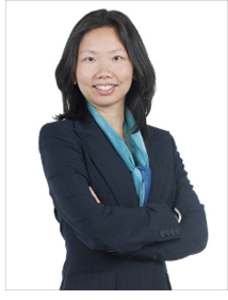 Huiwen began her career at the World Bank, where she focused on Private Sector Development issues including corporate governance, aid effectiveness, privatization and globalization. She then joined the New York office of Clifford Chance, where she advised on capital markets transactions and corporate matters for companies and major investment banks in Asia, Europe and Latin America. When her husband was based in Camp Pendleton and deploying to Iraq, she relocated to the San Diego office of Latham & Watkins, where she worked on everything from start-up financing to multi-million dollar deals. She has worked pro bono on microfinance in Haiti, clean tech in San Diego, and military family and veterans issues. Huiwen helps investors maximize the investment opportunities of crowdfunding by having the information they need to make an educated decision.

Huiwen Leo, Director of Investor Services, CrowdCheck is a corporate and securitiesattorney. Huiwen received her B.A. and M.A. in law from Cambridge University and received her LL.M. with distinction from Georgetown University Law Center. She is a member of the New York and California bars. Huiwen is fluent in English and Chinese.