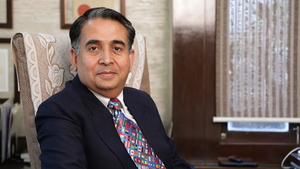 Mr. Prashant Ajmera is an Indian lawyer with more then 25 years of experience in legal field with several years of experience in the Canadian & USA business and Investor immigration and international trade including 5 years of practice in the High Court of Gujarat, Ahmedabad, India in the office of the Additional Central Government Standing council ( Federal Prosecutor)

Partner with the  leading Canadian Immigration law firm Brownstein Brownstein & Associates from 1992 till 2000. Prashant frequently writes article for a variety of publications, conducts seminars and travelled twice as a delegate on Team Canada Mission to India and Japan with prime Minister of Canada.

He is a member of the Gujarat State bar association in India, member of the International Bar Association London UK and Institute of Chartered Secretary and Administration (Canada & UK)

Fluent in English, Hindi and Gujarati language and he operates his practice out of Ahmedabad, India and Montreal, Canada.

Prashant Ajmera is a reputed Indian lawyer and Canadian citizen with more than twenty-five years of experience in the field of corporate and migration law and international trade. His law practice is based on the solid foundation of providing honest and accurate legal advice to his diversified clientele who wish to obtain Residency and Citizenship through Investment.

Mr. Ajmera holds undergraduate and post graduate degrees in science and law respectively from India. He began his career as a lawyer at the High Court of Gujarat and was associated with the office of Additional Central Government Standing Counsel (Federal Attorney’s office) for five years.

In 1992 he was awarded a double professional degree from the Institute of Company Secretary and Administration (ICSA) while studying at the London School of Business, UK.

In 1993, he joined a Montreal, Canada, based law firm specializing in residency and citizenship for professionals and businessmen as an Associate Lawyer responsible for the Asia-Pacific region.

In 2001, he started his independent practice in Canada, assisting foreign businesses to set up or expand their business in North America.

A visionary, he recognized the future of ‘Residency and Citizenship by Investment’ and conducted the very first EB-5 Investment Program seminar in India in 1999 in Mumbai.

This expertise and knowledge gives him a unique edge – he not only provides his clients with detailed information and advice regarding a particular country’s residency and citizenship program but also offers customized legal solutions suited to their individual circumstances and needs. His profound understanding of the laws and legal documents of Indian and foreign jurisdictions  aid in guiding HNI clients every step of the way, especially apropos to source of funds and supporting documents, the most pertinent and crucial aspects of any residency and citizenship by investment petition.

Mr. Ajmera is a member of the International Bar Association (IBA) and has addressed the IBA Annual Conference as a speaker on two occasions (Cancun-2001 & Durban-2002).

He has been a delegate on the Team Canada Trade Mission with Ex-Prime Minister of Canada, Rt. Hon’able Jean Chretien, on two occasions - to India and Japan in 1996 and 1999 respectively.

In January 2019, he published a first of its kind book, “Millionaires On the Move”, which is  available on Amazon.in. This book explains how one can obtain a second passport through the business immigration by investing in residency and citizenship programs and Start Up programs of several countries.

His second book, “How to plan for your child’s foreign education in 2020ne – Myth v/s Reality”, is available on Google play and Amazon.in. It is a handy reference for every Indian parent who wishes to send their child abroad for higher education.

He regularly conducts seminars in various countries such as USA, Canada, India, Indonesia, Pakistan, UAE and Malaysia on corporate migration.

He is an expert speaker for industry bodies such as the Gujarat Chamber of Commerce and Industry, Hindustan Chamber of Commerce, The Indian Merchants Chamber and Canadian Trade Office on the subject of “Doing Business in Canada”. He regularly contributes to online media and publications such as the Times of India and the Journal of Institute of Chartered Secretaries and Administrators (ICSA). He has also conducted and participated in radio and television shows related to corporate migration.
He has also contributed a chapter on “Indian commercial secured transactions” for an international law book published by Carswell.
Mr. Ajmera is a very active member of Rotary International and as Club President (2016-17) he has initiated many worthy social projects for assisting and empowering the underprivileged and less fortunate members of society. He is the Director of “Wings To Fly”, an NGO working for the rehabilitation and economic empowerment of women with a criminal past.