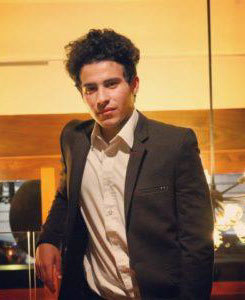 Born and raised in Tunisia, Mohamed Anwar Akkari is a native Arabic speaker who worked with America EB-5 Visa on translating our website’s content to Arabic. Anwar, a student at Yale University, is pursuing Mechanical Engineering and potentially doing Yale’s multidisciplinary Energy program.

At Yale, Anwar is the political chair of ASA (Yale Arab Students Association) which serves as a voice for the Arab population on campus and aims to spread an understanding of the Arab world, its culture, and current issues that affect the region.

He is also part of SOS at Yale (Students of Salaam) which aims to implement a plan to empower and connect the local New Haven immigrants and refugees by mentoring, tutoring and instructing young refugees from Africa and the Greater Middle East.

Similarly, he serves as an interpreter for the Refugee Resettlement Coalition in New Haven which coordinates with IRIS to support refugees Anwar is currently working with YUAA (Yale Undergraduate Aerospace Association) on a project to build solar panels.

Previously, Anwar spent a summer abroad studying in the Universidad de Deusto, Spain, taking classes in Spanish language and culture. Using his skills as well as knowledge of the Middle East, he strives to help increase America EB-5 Visa reach in to the Arab World.

He is constantly ready to seek different challenges outside of the scientific and technical realm as he believes in the importance of having a polyvalent experience in his professional career. He speaks English, Arabic, French and Spanish fluently.