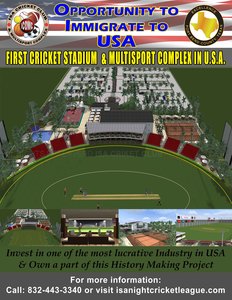 ICCMC LLC (the “Company” or “Isa Cricket Club” or “ICCMC”) is an existing Cricket facility with two flood-lit cricket fields and a club house planned, designed and funded by Mr. Nawaid Isa in 2013. The Club hosted limited games and leagues in the year 2013, 2014 and 2015 as pilot programs. Isa Night Cricket League (INCL) is the only event organized so far by our Club to test the popularity of night cricket in Houston with the focus to measure the interest in weekdays’ 7 PM to 11 PM time slots. This was our organization’s main exploration as the day time and weekend night Cricket are already very popular in the region. We interviewed cricket players and Cricket officials before installing professional lights on two grounds to come up with an optimal signing fee to play during weekday nights. $1000/team with additional required uniform fee of $25/player was carefully announced. With a word of mouth marketing and our Facebook announcement, 12 teams signed up for this first night league in Houston.

The Club, in its mere 18 months of partial operation, was able to at tract companies like Emirates Airlines, Wallis State Bank, Chase World Travel, Ron Aga Realty, Cyndrus a nd other local businesses as advertisers and sponsors. The facility has been featured in local newspapers and TV channels. Mr. Isa has already been interviewed multiple times by top Asian TV channels like GEO TV and newspapers such as Pakistan times and Pakistan Chronicle and TV Asia and Time of India. Local Houston news channel ABC 13 also approached Mr. Isa for a feature presentation of the project that has not been scheduled yet. Wallis News Review and local community newspapers have published several articles on the project.

ICCMC is strategically located near the Houston metropolitan area in close proximity to a number of affluent neighborhoods and communities at 9311 Johnson Rd, Wallis, TX 77485. Houston is the most heavily populated city in Texas and the American South, and the fourth most populous city in the United States. With a census-estimated 2014 population of 2.239 million people, it also is the largest city in the Southern United States, as well as the seat of Harris County. It is the primary city of its metropolitan area, Greater Houston, which is the fifth most populated metropolitan area in the United States. Houston's economy has a comprehensive industrial base in manufacturing, aeronautics, energy, and transportation. It is also leading in health care sectors. Only New York City is home to more Fortune 500 headquarters.

ICCMC will operate its multi-sport complex within the Golf Driving Ranges and Family Fun Centers industry, which will expand during the next five years as industry operators specialize their product portfolios to attract particular demographics. While leisure time is expected to increase at a slight annualized rate of 0.1% during the five years to 2020, more individuals will value spending leisure time with their family, stimulating consumer attendance rates at golf driving ranges and family fun centers. Furthermore, while per capita disposable income will rise, encouraging more consumers to purchase high-cost entertainment options, growth in the number of time-strapped individuals will spur demand for local activities, such as golf driving ranges and multi-sport complexes.