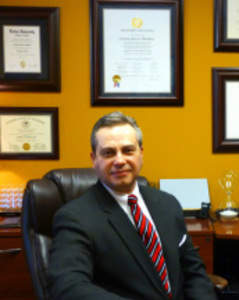 Attorney Blatteis provides corporate and transactional legal services to individuals and business entities doing business in the United States and also internationally. He assists clients with their litigation matters in the United States and has extensive experience in representing foreign nationals and immigrants in this area. Additionally, Mr. Blatteis serves officially as a “Consulting Attorney” for the Consulate General of Mexico in Little Rock as well as for the Consulate General of Peru in Atlanta.

A first generation U. S. Citizen of Hispanic and German descent, Charles Blatteis is bilingual in English and Spanish at the legal professional level and speaks French at the conversational level. Charles Blatteis graduated from the Georgetown University School of Foreign Service with a BSFS in International Law, Politics and Organization and a Certificate in Latin American Studies. He obtained his J.D. in Common Law from Tulane Law School along with a Certificate in European Legal Studies. Over the years, Mr. Blatteis has held various positions in international business and/or law with employers as diverse as International Paper Company in their Memphis headquarters and Baker and McKenzie (the world’s largest international law firm) in their Chicago headquarters. He has also worked as a partner in some of Memphis’s largest  law firms, the Bogatin Law Firm, PLLC and most recently at Burch Porter & Johnson, PLC, before establishing his own firm the Blatteis Law Firm, PLLC. Attorney Blatteis has also been awarded a United States patent as a co-inventor of an ecologically friendly manufacturing process, which has subsequently been patented in various countries worldwide.

Price: Free
EB-5 Visa & Immigration Issues for Spanish Investors in Spanish, 20 Dec 2017 from EB5Projects on Vimeo. Conversation about News & Events in the EB-5 Industry with Analysts, Experts and Newsmakers. Questions can be made by calling: +1-917-421...