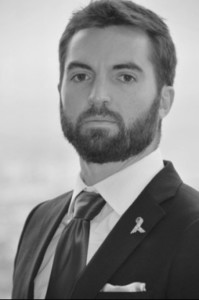 Mr. Johnson's practice consists primarily of representing clients in the non-immigrant visa and employment based immigrant visa process. In addition, Mr. Johnson has excelled in providing representation in removal proceedings. As an immigration attorney, Mr. Johnson has experience in a broad range of immigration issues. These varied responsibilities afford him full respect for the U.S. immigration laws and an appreciation for the complex issues that require our firm's representation. He is known for his quiet confidence and his unwavering desire to help his clients achieve their goals in the United States. Mr. Johnson is the ultimate "people person" and clients love his attention to detail.

An attorney licensed by any state in the United States is allowed (by federal law 8 CFR §292.1(a)(1) ) to practice immigration law before the Dept. of Homeland Security, the USCIS, ICE, CBP, Board of Immigration Appeals (BIA), and the Executive Office for Immigration Review (EOIR) in all of the American states.

As an intelligent legal advocate, Attorney Johnson has been praised by his business immigration clients for having a keen financial sense and possessing the knowledge of how to establish how financial resources flow in and out of a business. This knowledge is invaluable to business immigration clients. Consequently, Mr. Johnson is highly sought after for PERM, labor certifications as well as other immigrant and non-immigrant visa applications/petitions.

In addition, he has enjoyed remarkable results in handling consular matters in some of the most difficult consular posts in the world including Abuja, London, Islamabad, Istanbul, Montreal, Mumbai, Chennai, New Delhi, Pretoria, Kathmandu, Kolkata, Dhaka, Johannesburg, Kuala Lumpur, San Salvador, Tijuana, Toronto and Mexico City. The key to his consular success is his quality preparation of application packages as well as his perseverance in ensuring that the consular officers are aware that he expects a favorable decision as soon as possible.

While in law school, Mr. Johnson clerked for the Honorable Judge Robert J. Kern at the 387th District Court in Fort Bend County as well as with the Immigration and Customs Enforcement Office of Chief Counsel. Mr. Johnson also worked with noted Professors J.T. Oldham on family law and David Dow on criminal law. Mr. Johnson received the 2005 Public Interest Fellowship for his work in the Department of Homeland Security.

Brian Johnson is the founder BKJ Visa Law (www.bkjvisalaw.com), a boutique full-service immigration law firm based in San Diego, CA.  He is licensed in Texas and Board Certified in Immigration and Nationality Law by the Texas Board of Legal Specialization. He currently serves on AILA Latin America-Caribbean Chapter CBP Committee and previously served on the AILA Practice Management Committee and AILA San Diego Pro Bono Committee.  His practice is focused on business immigration and consular matters and his clientele ranges from families to small and medium size businesses. Mr. Johnson is admitted to practice before the U.S. District Courts for the Southern and Northern District of Texas, and U.S. Circuit Court of Appeals for 5th and 9th Circuit. He practices exclusively in the area of Immigration and Nationality Law and is a graduate of Rutgers College and the University of Houston Law Center.