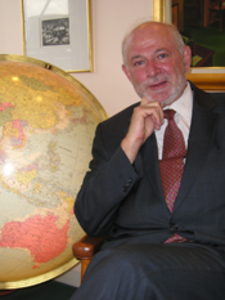 Born in Wolfratshausen, Germany, Philip J. Kleiner brings a diverse and scholarly immigration background to BMK LLP. Mr. Kleiner earned his B.A. at Yeshiva University and his J.D. at Brooklyn Law School. He is currently admitted to practice in New York, Arizona, the U.S. District Courts of New York’s Southern, Eastern, Northern, and Western Districts, the U.S. Tax Court, and the U.S. Supreme Court. Mr. Kleiner’s many legal honors include attaining the highest possible rating of “AV” from Martindale Hubbell, the national directory of attorneys, indicating preeminent legal ability and the highest standard of ethics.

Mr. Kleiner has conducted courses in America and overseas, including lectures in Israel and at the American Management Association.  He has been a member of the British-American, German-American, Israel-American, Swiss-American, Swedish-American, and Netherlands-American Chambers of Commerce. In addition, he has lectured for online continuing legal education courses on immigration law and at a “Life After F-1 Visas” seminar at the State University of New York at Stony Brook. Mr. Kleiner has also served as a contributing writer for a Japanese newspaper.