Jurisdiction:Federal District Court for the Northern District of California

This case involves fraud, self-dealing, and unregistered brokerage activity in violation of the federal securities laws. Defendants Attorney Jean Chen (“Chen”), her law firm, Law Offices of Jean D. Chen (the “Law Offices”), and her husband, Tony Ye (“Ye”), were paid over $12 million in undisclosed commissions to sell securities to their legal clients in offerings under the federal EB-5 Immigrant Investor Program. They attempted to conceal their unlawful activity with the help of Defendant Kuansheng Chen (“Kuansheng Chen”), who provided an off-shore bank account to receive the transaction-based compensation and posed as the head of a Beijing immigration agency that was actually co-owned and controlled by Chen and Ye.

According to the indictment, Chen, 54, of Atherton, was the sole partner at the Law Offices of Jean D. Chen, which held itself out as specializing in immigration law. Ye, 51, also of Atherton, was formerly married to Chen and held himself out as the manager of Chen’s law office. The indictment alleges Chen and Ye prepared and submitted to the United States Citizenship and Immigration Services (USCIS) fraudulent documents that contained false signatures and falsely described how applicants would qualify for the EB-5 program.

Under the EB-5 program, foreign nationals may obtain permanent United States residency, commonly known as “green card” status, by investing in qualifying American businesses. Alien investors who comply with program requirements initially receive a grant of conditional permanent residency status for a two-year period. After two years, the alien investor can petition for permanent residency. To obtain permanent residency status, the applicant’s investment must amount to $500,000 if made in certain geographical areas with low employment rates; if the investment is not in a designated low-employment area, the investment must amount to a minimum of $1,000,000. In addition, under the EB-5 program, applicants may make use of “regional centers.” Entrepreneurs seeking investments for American businesses may establish regional centers to promote investment opportunities and make such opportunities available to EB-5 applicants. The regional centers generally promote investment opportunities within designated geographic areas. The Law Offices of Jean D. Chen represented clients who invested a total of approximately $52,000,000 into projects under the EB-5 program.

In this case, the indictment describes steps taken by Chen and Ye to fraudulently obtain immigration benefits through the EB-5 program on behalf of their clients. First, the indictment alleges that Chen and Ye falsified documents to hide the true ownership and nature of a regional center. Specifically, the indictment alleges that in 2014, Chen and Ye purchased the Golden State Regional Center and other entities, and almost immediately after the purchase, transferred ownership to a straw owner. The person to whom the entity was transferred did not know she was being named as the owner. Also, Chen and Ye filed papers with USCIS, requesting that the government continue to recognize Golden State Regional Center as a regional center qualified to promote EB-5 investment within the South Bay. The papers contained false signatures of the purported straw owner. Second, defendants prepared and submitted falsified EB-5 applications. For example, visa applications contained false signatures of the purported straw owner, false statements about the extent to which the Law Offices of Jean D. Chen represented both the investor and Golden State Regional Center, and false statements about the manner in which investor funds would be used.

The indictment also charges defendants with obstruction of justice related to investigations being conducted by the United States Securities and Exchange Commission (SEC) and the FBI. On October 18, 2018, the SEC filed a civil complaint against Chen, Ye, and other individuals and entities, alleging, among other things, that Chen and Ye improperly solicited investments and committed other violations of law. The indictment alleges that during the course of the SEC’s investigation, defendants made demands of the straw owner of Golden State Regional Center that she provide false answers to SEC investigators. Further, the defendants allegedly logged onto someone else’s email account and deleted emails relevant to the FBI’s investigation into the visa fraud. 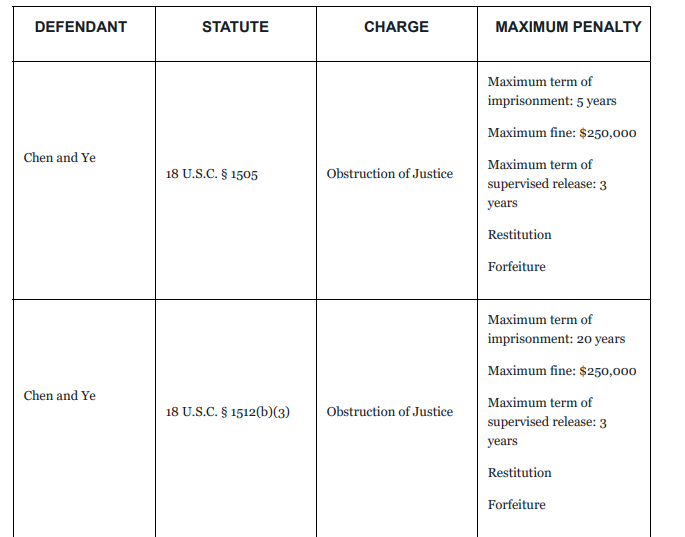 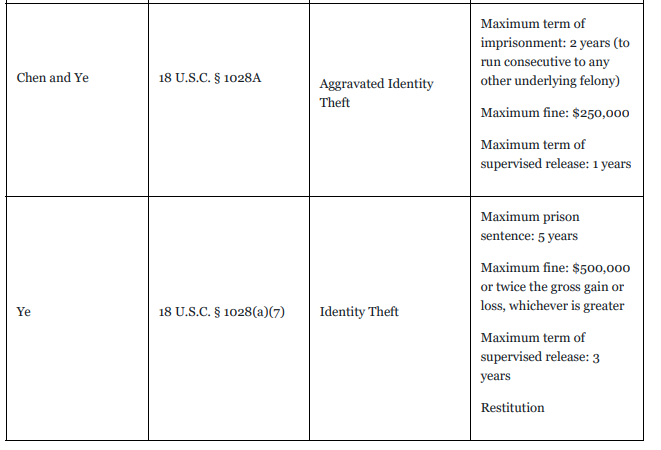 The Securities and Exchange Commission today charged a California-based immigration attorney and her husband in a fraudulent scheme that generated millions of dollars of undisclosed compensation from foreign investors seeking permanent U.S. residency through the EB-5 Immigrant Investor Program.

The SEC’s complaint alleges that Jean Danhong Chen, Tony Jianyun Ye, and Law Offices of Jean D. Chen, with the assistance of a personal friend, Kuansheng Chen, secured over $10 million in undisclosed commissions by selling EB-5 securities to hundreds of Chen’s legal clients. The complaint also alleges that Jean Chen and Ye secretly acquired and operated an EB-5 regional center, Golden State Regional Center LLC, and later advised clients to invest in the center’s projects without disclosing their ownership interest. According to the complaint, Kai Hao Robinson assisted in the scheme by posing as the sole manager in control of Golden State when she was in fact merely a figurehead controlled by Jean Chen and Ye.

After learning of the SEC’s investigation, Jean Chen and Ye allegedly backdated documents and scrubbed other business records to conceal their role in the alleged scheme.

“Ms. Chen’s alleged self-dealing breached her clients’ trust and violated the federal securities laws,” said Melissa R. Hodgman, Associate Director of the Division of Enforcement. “Where conduct harms investors in our markets, attempts to stymie our investigation by fabricating evidence and withholding documents will not deter our efforts.” The SEC’s Office of Investor Education and Advocacy has issued an investor alert describing steps that can be taken to research EB-5 offerings.

The SEC’s investigation was conducted by D. Ashley Dolan, Sarah M. Hall, and Heather A. Powell and supervised by Melissa A. Robertson of the SEC’s Washington, D.C. office. The litigation will be led by Kenneth W. Donnelly. The SEC would like to thank the U.S. Citizenship and Immigration Services for its assistance in connection with this investigation.